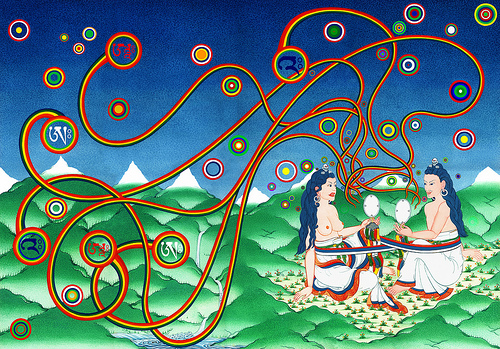 Entering the Heart of the Sun and Moon

The cover image of Entering the Heart of the Sun and Moon is a thangka painting by the Tibetan artist Kumar Lama. The painting belongs to a rare category of Vajrayana imagery – as it depicts a pawo and khandro (yogi and yogini) engaged in Dzogchen Long-dé practice. Dzogchen long-dé practices often employ gomtags—meditation belts—to maintain specific physical postures. Here the pawo and khandro are linked in their posture by a long single gomtag which is specific to the Khandro-Pawo Nyi-da Mélong Gyüd. The gomtag is red, white and blue—colors of the yogic tradition—which symbolize the solar, lunar and central spatial channels.

They gaze—not at each other—but at their own empty reflections as shown in the wisdom mirror (ye shes me long) held by the other. The melongs are emblazoned with reality flags which depict the vivid interplay of the elements - and streams of rainbow radiance emanate from each of their three major ’khorlos. The rainbows terminate in thig-lés - symbols of the essence of the elements which contain the seed syllables of mind:, emanent energy:, and corporeality:.

The landscape in which the couple sit is an alpine meadow and the sky is irridescent with thig-lés. The practice depicted is one in which the pawo and khandro integrate with the energy of their own inner wisdom and method natures through physical proximity - whilst their awareness rests in the empty space provided by the mirror. The practice requires transmission - and more detail is necessary than is provided here, in order to accomplish what is indicated.

The khandro and pawo are based on lineage likenesses of A-yé Khandro and Aro Yeshé and show them wearning the white skirts (sham thabs) of the gö-kar-chang lo’i-dé tradition of the non-celibate Vajrayana ordination line. Likewise they wear the white spiral conch earrings, and the skull-surmounted takdröls of the mahasiddha lineage.