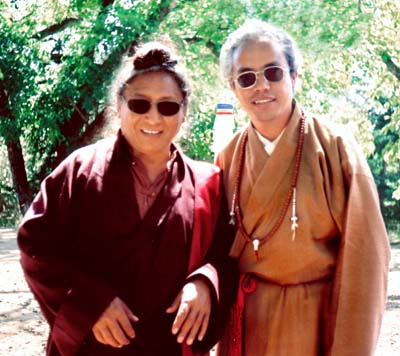 The thangka is an expression of the inner world of Tibetan Buddhism and a powerful way of accessing the Tantric view of reality. – Kumar Lama

Venerable Kumar Lama is a master thangka painter whose artistry has been praised by many Nyingma Lamas. He is currently the resident artist and thangka painting teacher at Pema ’ö-Sel Ling – the retreat centre established by Tharchin Rinpoche – in the Santa Cruz Mountains in California. Kumar Lama is a deeply dedicated teacher and yogi whose driving intention is to preserve the traditions and purity of thangka painting – and to bring this knowledge to the West.

He was born in Yolmo, an area of indigenous Vajrayana Buddhist culture in Nepal – near the borders of Tibet. He was discovered as a prodigy by the highly revered Palden Lama, and began his training at the age of nine. His thangka painting teacher died when he reached the age of fifteen – at which point Kumar Lama walked for five days through mountains and jungle to find the famous thangka painter Jig’mèd Lama. He was accepted as a student by Jig’mèd Lama and completed his training by developing his extant skills to peak of perfection, which has since been recognized and sought after by many important Lamas. This led to painting wall murals in several Gompas in Kathmandu. In 1988 he was discovered by Chögyal Namkha’i Norbu Rinpoche – which led to invitations to Italy, Switzerland, Germany, Austria, and France. In 1994 he met Tharchin Rinpoche who invited him to come to reside at Pema ’ö-Sel Ling as the master artist under the sponsorship of the Vajrayana Foundation. In 1999 he completed work on a large thangka (measuring 5½ feet by 8 feet) of the Düd’jom gTér lineage tree – which can be seen by appointment if one visits Pema ’ö-Sel Ling. It is a breathtaking accomplishment and provides a dramatic vision of the non-dual grandeur of Vajrayana. The intricate details of the painting were personally supervised by Tharchin Rinpoche and as such it represents a completely authentic demonstration of the realised legacy of the Düd’jom gTér.

Ngak’chang Rinpoche says of Kumar Lama:
Kumar Lama is magnificent—both as a person and as a visionary artist. His magnificence lies in his precision and consummate fluid ease. His paintings are luminous and clear in their sumptuous simplicity. His sense of harmony and visual balance are both natural and the result of utter dedication to the minutiæ, in terms of symbolic significance. Often where other lesser painters might flounder in terms of the unusual qualities of gTérma images, Kumar Lama is both inspiringly confident and relaxed. He truly lives in the sphere in which he portrays these fabulous realities, and it is an honour to be his friend.

Khandro Déchen comments:
The Aro gTér lineage Lamas Kumar Lama has painted have brought our lineage alive for students in a remarkable way – and in a way which we believe would have proved insurmountably difficult for many other thangka painters. There are few easily available images within the iconography of Vajrayana which portray powerful middle aged women – and the Aro gTér is made up almost entirely of such women. Lamas are usually painted as being the age they were when they had accomplished something important – so Aro Lingma is shown as a young woman and Aro Yeshé is shown as a boy of eight years. A-yé Khandro and A-shé Khandro are shown as teenage girls and the five mothers are shown from varying ages from 23 to 64. Kumar Lama’s skill and elaborate knowledge of Vajrayana visionary appearances enables him to execute work of the most inspiring kind and give a depth and breadth of the history of the Aro gTér which would otherwise not have been possible.

Heart of the Sun and Moon